Is Newt Gingrich running for President or is he not! Apparently, finally, he is not. Only yesterday his organization was poised to begin a pledge campaign designed to raise some $30 million to establish the feasibility of a Gingrich candidacy. Today the announcement came that he is not running, period. The Republican field now appears to be set with no other newcomers on the horizon. The decision was first reported by CNN this afternoon and reported by Politico as follows in part:

"The decision will bolster the contention of several key Republicans that Gingrich's repeated flirtation with a presidential run was a publicity stunt designed to keep him in the news and sell his books. These Republicans said Gingrich has a loyal following and lots of good ideas, but contended that what one called his "on-again, off-again" approach had undermined the seriousness of a potential candidacy. Rick Tyler, Gingrich's spokesman, said lawyers told Gingrich that dabbling in a presidential campaign could endanger the non-profit status of his nonprofit group, American Solutions for Winning the Future, which is holding a workshop in Cobb County, Ga., on Saturday. 'He had to make a choice between being a citizen-activist, raising the challenges America faces and finding solution to America’s problems, or exploring a potential candidacy,' Tyler said. 'It’s legally impermissible to do both. It was the necessary choice. It was the only choice.'”

Posted by steadyjohn at 2:07 PM No comments: Links to this post

This is the time of year when a trip to a cider mill is called for. My very favorite is B.F. Clydes Cider Mill in Old Mystic. "Cidermaster" and proprietor Harold Miner sells half a dozen varieties of serious, and delicious, hard apple cider. This is oldest continuously operated cider mill in the United States. Information and directions

Originally published 9/24/06 but just as valid today!
Posted by steadyjohn at 11:38 PM No comments: Links to this post

Quote for the day:

Democrats should run Mahmoud Ahmadinejad for president. He's more coherent than Dennis Kucinich, he dresses like their base, he's more macho than John Edwards, and he's willing to show up at a forum where he might get one hostile question -- unlike the current Democratic candidates for president who won't debate on Fox News Channel. He's not married to an impeached president, and the name "Mahmoud Ahmadinejad" is surely no more frightening than "B. Hussein Obama."

Posted by steadyjohn at 9:03 PM No comments: Links to this post

Moveon.org received a sweet discount for their despicable full page "General Betrayus" ad in Pinchy's NY Times. Now Rudy Giuliani is demanding a similar discount for an ad of his own.

Giuliani, calling MoveOn.org’s controversial “General Betray Us” ad “abominable,” said his campaign is asking the paper for a comparable rate for an ad to run following President Bush’s speech on Iraq.

The former mayor said his ad “will obviously take the opposite view” from MoveOn.org, which argued in its ad that Gen. David Petraeus is “cooking the books” on Iraq and cherry-picking facts that support his recommendation to keep a large number of troops in Iraq for some time.

According to blogger Confederate Yankee Moveon.org received a $100,000 discount in the price for their libelous ad.

A spokesman for MoveOn.org confirmed to The Post that the liberal activist group had paid only $65,000 for the ad. . . .

A Post reporter who called the Times advertising department yesterday without identifying himself was quoted a price of $167,000 for a full-page black-and-white ad on a Monday.

[Times PR director Abbe] Serphos declined to confirm the price and refused to offer any inkling for why the paper would give MoveOn.org such a discounted price.

Posted by steadyjohn at 6:35 PM No comments: Links to this post 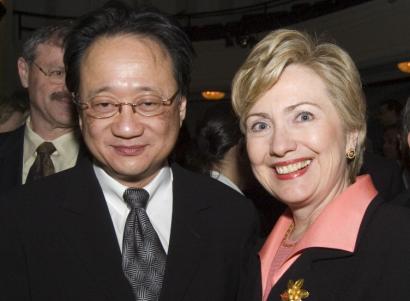 Does anyone really believe that Hillary doesn't know about this man's record and whence came his funny money? The most important question, as Rush Limbaugh has noted, is what favors was Norman Hsu, or whatever his real name is, expecting in return for his massive cash donations.
Posted by steadyjohn at 7:53 PM No comments: Links to this post

Steve Jobs: Doing the Right Thing!
Steve Jobs says he's read all of the complaining email sent by original purchasers of the iPhone in the early boom days. These folks have not lightly taken the news that Apple is lowering the iPhone price by $200. Therefore.....

....we have decided to offer every iPhone customer who purchased an iPhone from either Apple or AT&T, and who is not receiving a rebate or any other consideration, a $100 store credit towards the purchase of any product at an Apple Retail Store or the Apple Online Store. Details are still being worked out and will be posted on Apple's website next week. Stay tuned.

He lists three reasons for his largess:

....iPhone is a breakthrough product, and we have the chance to 'go for it' this holiday season. iPhone is so far ahead of the competition, and now it will be affordable by even more customers..... ....There is always change and improvement, and there is always someone who bought a product before a particular cutoff date and misses the new price or the new operating system or the new whatever. This is life in the technology lane. If you always wait for the next price cut or to buy the new improved model, you'll never buy any technology product because there is always something better and less expensive on the horizon..... ....Third, even though we are making the right decision to lower the price of iPhone, and even though the technology road is bumpy, we need to do a better job taking care of our early iPhone customers as we aggressively go after new ones with a lower price. Our early customers trusted us, and we must live up to that trust with our actions in moments like these.....

Posted by steadyjohn at 9:58 AM No comments: Links to this post

Now look at what conservatives in the U.K. have to propose in order to rein in the horrific costs of the NHS.

Failing to follow a healthy lifestyle could lead to free NHS treatment being denied under the Tory plans.

Like a supermarket loyalty card, the points could be redeemed as discounts on gym membership and fresh fruit and vegetables, or even give priority for other public services - such as jumping the queue for council housing.
Source: This is London
Posted by steadyjohn at 10:42 PM No comments: Links to this post

Expelling the Black Sheep!
Creating Security in Switzerland
Below is a photo of Swiss People's Party (SVP) President Ueli Maurer in front of a poster depicting the pariy's campaign to force the expulsion of entire families if any of their children commit certain crimes crimes.By the way, the SVP is Switzerland's largest political party.

(photo caption) Ueli Maurer, President of the Swiss People's Party SVP, smiles in front of a campaign poster reading "create security", during a press conference in Bern, Switzerland, in this July 13, 2007 file picture. A proposal by Switzerland's biggest political party to deport delinquent foreigners has angered anti-racism campaigners who say it evokes Nazi-era practices and unfairly blames minorities for crimes. In the run up to October elections, the nationalist SVP's campaign poster showing three white sheep kicking out a black sheep "for more security" has heated the national debate over the proposal to expel whole families of children convicted of a violent crime and drug offenses. (AP Photo/Keystone, Peter Klaunzer)
Source: MyWay News h/t Drudge
Posted by steadyjohn at 8:52 AM No comments: Links to this post